A Look at the History of Pewter | My SWD Power

Home  /  Uncategorized   /   A Look at the History of Pewter
July 15, 2020 Matt Derbyshire0 commentsUncategorized 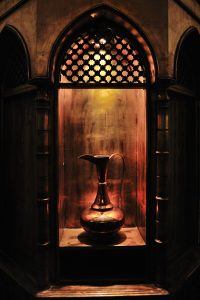 To most people, pewter is the stuff that silvery, tarnished pub tankards are made of. This fascinating material has other uses, though, and a long history. Svenskt Tenn, the contemporary Swedish design firm, has its foundations in Pewter. The company was founded in October 1924 by art teacher Estric Ericson, who opened a shop in Stockholm selling pewter. At the time, the material was considered exciting and valuable. Now, the firm does far more than sell individual pieces of pewter. It is involved with all aspects of interior design, although Josef Frank still sells some of those original designs, such as the schnapps flask “Brannvisfiskent”, which has an easily recognisable fish shape. There are dozens of other, new pieces, including jewellery, teapots and vases that take the traditional material and present it with a new, more modern twist.

Pewter does not always look like the tarnished tankards seen in historic films. It can have a striking white colour, and look quite glorious. Silver is the more desirable of the white “metals”, and traditionally, pewter was viewed as the poor cousin of silver. If someone could afford to purchase the silver version of a piece of jewellery or a decorative item, they would.

In more modern times, pewter has its uses. It looks good as a decorative item, such as those provided by Silver and Pewter Gifts, and it fits in well in homes with an English or Swedish rustic design. Antiques dealer Stuart Atkinson explains that something as simple as a large charger placed on a contemporary kitchen table can make a great centrepiece for the room.

Pewter is an alloy, not strictly just a metal. It is made of tin with small quantities of copper, antimony and bismuth. Pewter was made as far back as the bronze age. There is not a lot of archaeological evidence of its use, because it was easy for people to melt down old pewter pieces when they wanted to make something new. The earliest known piece of pewter is an Abydos flask that was found in a tomb in Egypt. It’s thought that this piece dates back to 1450BC.

The alloy didn’t come to England until much later, during the Roman invasion. The Romans had known about pewter for around 2,000 years by then and knew that to make good pewter required a lot of tin. England was appealing because it had rich tin supplies.

Pewter production peaked in the 17th century, with homes and taverns being filled with jugs, tankards, wine cups, candlesticks, and other pewter goods. There were even toys and buttons made from the alloy. It was affordable, easy to work with, and ubiquitous. By the 18th century, it had started to fall out of fashion. Tea drinking was the next big thing and this meant that the main interest in wares was for pubs.

A resurgence during the Arts and Crafts movement of the 19th century and the 1900s art nouveau scene saw Archibald Knox resenting pewter as highly desirable, with vases, tea sets, inkwells and even clocks of his being highly desirable. The Tudric range did well at London’s Liberty store and even today Liberty pewter pieces can fetch £5,000 up to £20,000 at auction.

Fontaine, a prominent antique dealer, sells some affordable pewter pieces from the 18th and 19th centuries for £50 to £100. These are great for interior decor and can dress up a restaurant or other room in a unique and eye-catching way.

← What Is a “Good” Bioprocess Made Of? The Health Benefits Of CBD →